This past weekend at Camp Patmos in Kelleyâ€™s Island, OH I was reminded again how God comes out of nowhere to blow you away with His nearness! Dan & I left early Friday morning to drive 715 miles to the island in Lake Erie where Camp Patmos is located. I was scheduled to speak four times to Middle & High School students about what it meant to be Fully Alive. As I prepare for events like this, I normally expect God to use me to impact lives for the Kingdom. That may have happened for some there, but I believe God brought me to Camp Patmos so He could gently remind me of something… He is present with me at all times. He spoke that to me over and over for 48 straight hours. Let me share a few ways He communicatedâ€¦

Dan & I sat on the porch of the dining hall overlooking Lake Erie for about two hours on Friday evening as we waited for the students to arrive. The sky was somewhat cloudy off in the distance but directly over us it was clear. You could see countless number of stars. The lake was simply gorgeous. Dan & I talked with God for a while. As the time approached for the students to arrive, we saw a shooting star. This was the largest shooting star I have ever seen. Seriously, it was huge. God was present!

Saturday afternoon I went for a little run (too much junk from the pop house!). I sensed God was directing me to speak on something different Sunday morning from what I initially prepared. I was running and thinking to myself, â€œGod is this you directing me or does this have something to do with Coldplay prodding me along on my run via Little Jimmy (the affectionate name for my Ipod Shuffler)?â€ As this conversation took place I sensed God simply asking me to look left. I turned and about ten feet into the woods off of the road stood a deer. Our eyes met and he watched me run by. I knew it was God directing me to change my initial plans. God was present!

Saturday evening the camp staff and those from churches in northern OH put a remarkable interactive visible description of ancient Jerusalem in the early first century. The students were able to experience a street in Jerusalem. They purchased bread, drinks, and fish, while looking at live donkeys, camels, and sheep. Following their â€œmarket placeâ€ experience, they were led off through the city gates down a some-what lit path to the foot of a 20-25 foot stonewall in a quarry. On top of the quarry they witnessed a re-enactment of the crucifixion scene. I canâ€™t describe in my frail words the impact of this event. I will simply say it was powerful. Since I spoke for about five minutes after each of the three groups of students came back into the quarry, I witnessed this scene multiple times. Each time I took this scene in, God communicated stronger and stronger in my heart â€“ â€œI love you. You are forgiven! You are clean! You are perfect because of my sonâ€™s perfect sacrifice!â€ God was present.

Last night as Dan & I drove home we hit some rain in Illinois and Eastern Wisconsin. We battled the rain for about 75-100 miles when it stopped. Just shy of Wisconsin Dells heading west we were stunned by one of the most amazing evening skies I have ever scene. The mixture of clouds with several shades of orange, red, pink, & blue was overwhelming. Right there, 500 miles into the trip in our rental carâ€¦God was present.

I wonâ€™t go into the way He spoke by allowing me to have an hour Â½ conversation with my brother-in-law, having dinner on a picnic table overlooking the lake with my mom & dad, interacting with students from my home church in Columbus, OH, meeting many new brothers & sisters in Christ that worked at the camp, singing songs of praise with the body of Christ, finding a place to watch the OSU game, seeing a husband wrap his arms around his wife and one-year old daughter as they sang praises to the King, and hearing incredibly wonderful news from a friend when I returned home at 11:00 last night. God was indeed present!

I was overwhelmed with Godâ€™s presence not because He hasnâ€™t been around lately and He finally showed up on a little island in OH. I was overwhelmed because He reminded me He is always present with me. I just havenâ€™t recognized this wonderful truth lately.

So this morning in Bloomington, MN I sensed Godâ€™s nearness in a chilling wind while holding my daughterâ€™s hand as she waited for the bus stop. I was reminded of His goodness when I kissed Gretchen goodbye when I left to come to this coffee shop. And I just saw God as two close friends that are willing to lay down their lives in a second for Him walked in here for a little get-together. God is present! 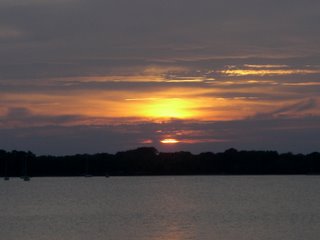 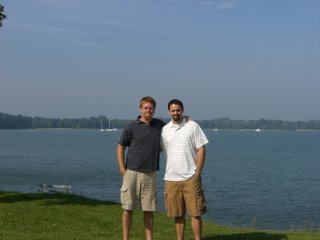