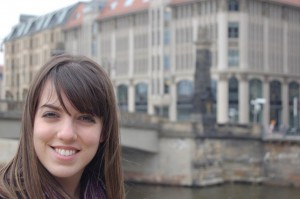 There are certain things that cross language barriers…

These are things that can be shared between people… felt and understood whether or not your spoken languages are the same. God showed me this in fresh and heart warming ways during our time in Germany as we were able to experience these things with people we were blessed to meet during our 10 day stay.

I started out the trip, honestly, with these hesitations and doubts about how effective we could be in ministering to people in Germany when none of us speak German! (Well, Eric is the exception… just ask him to count to 12 in German, and he will count each number loudly to you with gusto and a nod of his head for each number). Now of course, I realize that we as Americans are very spoiled in that the English language is pretty much spoken and understood mostly everywhere at least to an extent. I think my hesitation came into play more as I prepared/pondered what my “role” on the trip would be as a musician playing some of the songs I’ve written.

I was unsure of how these opportunities would play out in a place where the language most familiar to the people I was singing to was completely foreign to me. I’m also a detail person… a bit of a Type A planner personality. I knew that with this type of trip, there was a lot that would require “going with the flow”, being available and flexible. I didn’t know all the details of where I’d be playing, if there would be a keyboard or piano, if there would be translators, etc. My one prayer request before I left was that I would be flexible and just willing to jump in and sing however and wherever God had planned. That I would be more concerned about His agenda than mine. That I would just be this vessel and be used in spite of my human limitations and uncertainties.

Well, thank God that He is so much bigger than the limitations my mind puts on circumstances. He wasted no time in showing me this right away as soon as we arrived in Germany. Before I even played my first song at Rob’s church on that first Sunday, (March 14th), I found myself surrounded by a church family, singing worship songs in German, and tears flowing from my eyes. As I closed my eyes and heard the familiar melody of songs like “How Great is Our God” with lyrics being sung in a way I never had heard, I was overcome with how beautiful it was. Even songs whose melodies I didn’t even recognize, much less the words, brought me into the presence of God in a powerful way because I saw the hearts of worship around me that were singing out the songs so passionately. It expanded my view of The Church… it made me realize how week after week, while I am with my church family in Raleigh, North Carolina, there are churches across the globe singing a song like “How Great is Our God” in every language, and God knows every language. And He is hearing it like this beautiful International Medley of praise to Him. The people standing with me in that church building in Dorsten, Germany really felt like brothers and sisters in Christ. Singing with them, at times trying to sing the songs in their language, I felt like I got a glimpse of what Heaven might be like. Instead of the experience making me feel out of place or alienated because I spoke a different language, it only assured me that God is bigger than languages. That music is something He created to be a powerful avenue of worship that can be entered into with our brothers and sisters in Christ no matter what language we speak.

I love that God started out by teaching me this lesson right away…and after that, as each day’s opportunities presented themselves, all God asked of us was to be willing to use the giftings that He gave each of us. To be present and engaged when we talked to people and heard their stories. To see how what we communicate is really only 8% verbal and the rest is all the non-verbal stuff…the HEART…

The second Sunday (March 21st) I was reminded of the other thing I love about music that never ceases to amaze me. We were gathering with the church family that Duane and Daylin Beach minister to in Vilsek near a US Army base. The majority of the church body there was made up of American soldiers and their families, so this time, it wasn’t the language barrier I was nervous about. The thought on my mind was more, “What can I possibly have to say in my songs that talk about things like financial uncertainty or learning to surrender to God when things don’t go the way I plan” to a group of people who deal with stress and sadness and fear and loneliness and loss and uncertainty to a degree I’ve never known? I suddenly felt like all I had gone through in the past year that had birthed these songs was so pale and “grade schoolish” compared to what these families face on a daily basis. Again, I just asked God to somehow use what I had to bring. Singing songs is like opening up your journal and putting it to music in front of an audience. It is very exposing, but there is something about singing my songs that just lights me up inside. I LOVE to sing and I LOVE to proclaim truths about my God that He has shown me. How faithful He is. How generous and kind. How loving and personal. How NEAR He is to the broken-hearted. I feel like I am most alive in those moments when I’m playing and singing out those musical journal entries. After the service, a woman whose husband was about to be deployed to Iraq said to me, “That song you sang about uncertainty really spoke to me and my friend today. Our husbands are being deployed soon, and what you said really ministered to our hearts. Thank you.” I am constantly stunned by these responses. Here, I wrote this song because I was nervous about our house foreclosing, and this woman resonated with the lyrics even though her situation was so different (and so much harder) than mine. Music is truly the universal language. My heart is over-flowing with thanks to God for giving me the opportunity to sing a few songs in the beautiful country of Germany to the beautiful people living in Germany.