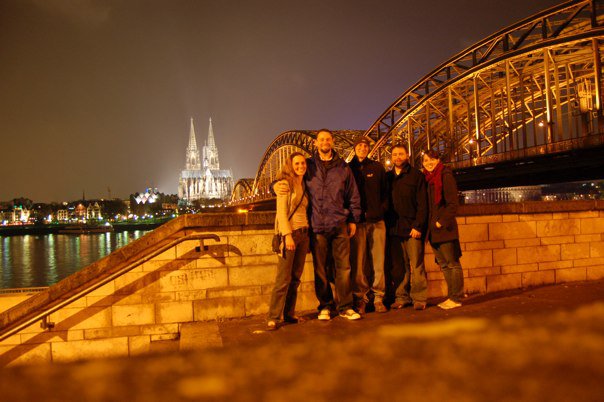 It was our intention when we left for Germany to keep this website updated with our whereabouts and stories of God working but the busyness of travel and sporadic internet use derailed this plan. So now that we are back and settling into U.S. life I want to take some time to fill you in. There is no way I can summarize the trip in one entry so I will do this in three entries over the next several days. Our trip to Germany was divided into three sections. The first part of our trip was spent in western Germany in the town of Dorsten with an afternoon in Cologne as well. After Dorsten we spent three days in the great city of Berlin. For the last part of the trip we spent a little over 24 hours in the town of Vilseck ministering to & with a church dedicated to serving military families in Germany. For this post I will write about Dorsten. If you are on facebook, Lisa & Gretchen have posted several pictures of the trip as well. Look them up.

After a few long flights we all finally made it to the Dusseldorf airport on Saturday, March 13. Because of several delays Gretchen and I arrived six hours later than we were supposed to. To make matters worse one piece of our luggage was missing as well. Poor Eric, Lisa, Dan Occhiogrosso (from Ball for Lives), and Rob Stearns were waiting in the airport for four hours and we had no way of contacting them to let them know. Since we arrived so late we had to rush right to the rental car place and get to Dorsten. On Saturday night Dan did the halftime show for Rob’s basketball game and the Beavers & Millers were involved in a concert called “Jesus Jam” at Rob’s church. So there we were at Rob’s church with the same clothes we had on since Friday ready to jump right into the mix.

After an amazing time of worship lead by the youth group of Rob’s church I spoke to those in attendance through an interpreter. I shared with them the words of Jesus in Matthew 11 regarding Jesus’ invitation for all those who are weary and weighed down with burdens to come to Him and take His yoke upon them. I shared with the group my personal struggles with losing my sister Penny to cancer and how I had to choose to bring my weary heart to Jesus for rest. I heard from several after the concert that God was speaking to them. I pray they continue to “come” to Jesus and find the only true rest available to them.

After a much needed night of sleep, we were involved in a few things on Sunday. During the A.M. service Lisa sang one of her songs and I once again spoke to the church through an interpreter. I challenged the group from 1 Chronicles 11 and the story of David’s mighty men. I told them that just as David’s mighty men desired to honor their king and expand His Kingdom, we need to be people of honor, loyalty, and perseverance as we pursue our King Jesus and look to expand His Kingdom on this earth. Dan shared about Ball for Lives and how he is striving to serve Jesus and make a difference in the world by using a basketball. I think those in attendance were impacted by the truth of Scripture and the testimony of a present day mighty man of God.

A special moment for me during this service was to see Gretchen practicing her gift of mercy and heart of compassion. During the service one of the girls from the youth group was obviously having a difficult time and could not control her tears. Although this girl did not speak much English and Gretchen definitely does not speak much German, a simple message was communicated from Gretchen to this girl – I CARE! Gretchen moved from her seat, knelt in front of the girl, put her hand on her and began to pray. The look on the girls face was priceless. She was so moved by this act of love.

Sunday afternoon we once again were involved in another opportunity. Rob put an ad in the paper for people to come and experience an “American style of church”. Out of curiosity people came to the event to see what “church” looks like in America. If they only knew that church services in America are done about a thousand different ways right? But we took this opportunity to share about our love of Jesus. Rob’s poetry was read, Lisa sang her songs, and I spoke about Jesus’ offer of abundant life. At the end of this service I told them that “abundant life” doesn’t mean a life of no pain and heartache. I once again shared about my aching heart and struggles with Penny’s death. After the concert Rob (who speaks German fluently) told me about his conversation with one of the couples present and how she told him of her cancer. I remembered that this couple just left so I went running out of the building and found this couple outside. Through my broken German and their broken English and many hand gestures I communicated to this couple that I would be praying for them. This dear German woman gave me a hug and I gave her husband a firm handshake. “God, would you please heal this dear woman? Would you show them this amazing full life in the midst of unbelievable struggle and heartache?”

On Monday we went to our friend Ilona’s house for lunch. Eric and I met Illona during our last visit to Germany and we immediately fell in love with her (and her marvelous cooking). This “lunch” date turned into an all day affair and we stayed with Illona, her nephew Thorsten, son Marcel, and Sebastian until 9:00 in the evening. Sebastian is an intern at Rob’s church and is staying at Ilona’s house. The day was wonderful! The food was amazing and we had so many God-ordained conversations. For the sake of privacy I won’t mention names but one of those we spent time with was really searching spiritually. This person shared with us how his grandfather had passed away as a result of cancer and he couldn’t see how there could be a God if God would let suffering like that happen. So once again I shared about Penny and how that situation was incredibly difficult. I shared with how I, and especially Penny, saw God work in the midst of this difficult time and through this experience I believe now more than ever that God is alive, active, and loving people. At the end of the day I gave him a copy of Fully Alive and asked him to read it and consider the truth found in the book. “God, would you continue to reveal Yourself to this seeking new friend of mine? Jesus, I pray he drinks of the water you offer him so he will never thirst again!”

On Tuesday, Dan, the Millers, and Beavers drove to Cologne. After a hike up to the top of the cathedral we decided to see if we could get into some conversations with people about Jesus. In front of the cathedral Dan took out his basketball and began to do some of his ball handling tricks. After a few minutes a crowd started to gather. One of those watching, a girl named Selen (sp.?), asked if she could participate. So Dan began showing her some of the tricks and she tried her best to perform them. When her friends saw her doing this they came over to watch as well. After a few more minutes Dan was playing a passing game with 9-10 girls from Turkey. They asked why Dan was doing his tricks in front of the cathedral and God took over. Over the course of about 30 minutes Dan, Gretchen & I, and Eric & Lisa talked with people about our faith in Jesus. Eric & Lisa talked with a man from Turkey and even exchanged contact information. Dan shared his faith with about 6 of the Turkish girls while Gretchen and I talked with Selen and her friend. I found out they were of the Islamic faith so we began to talk about the similarities and differences of our faith. I told Selen and her friend that the Koran considers the Bible a “holy book” and that they should consider reading it. At the end of our conversation Selen’s friend told me she wanted to get a copy of the Bible to read. Everyone we spoke with was given a copy of Fully Alive. “God, would you use your truths communicated through our words and the words of Fully Alive to reach these people. I am bursting with excitement to imagine the many people who may enter your Kingdom if these beautiful people accept your gift of salvation!”

Tuesday evening we headed back to Dorsten and we had dinner with Rob, Ula (my translator from Sunday’s service), her husband Thomas and sons, and a friend of Rob’s wanting to practice English. Once again, not all at the table that night knew Jesus as Lord & Savior. We stayed there until 2:00 am laughing, eating, and sharing stories.

I really love Dorsten! Eric and I call it our German home. The hospitality shown to us was unbelievable and I pray many in that town enter into eternal life found in knowing God & Jesus in a relational way. It was hard to leave Dorsten on Wednesday morning. I hope God allows many more trips there. It is such an honor to come alongside of the saints of God there impacting this wonderful town with the love of Jesus. I am a better follower of Jesus because of their example of service, hospitality, and joy. Here are some pictures: 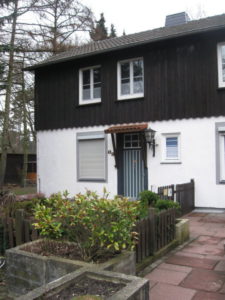 Our hostel in Dorsten 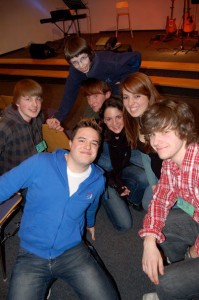 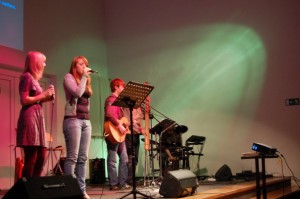 Some of the youth of Rob’s church at “Jesus Jam” 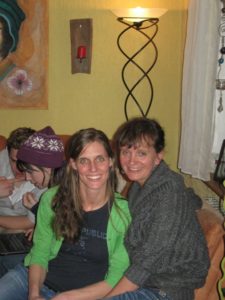 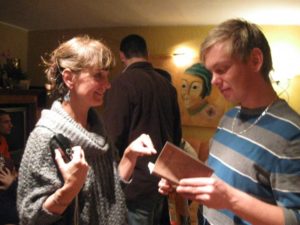 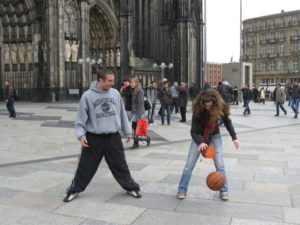 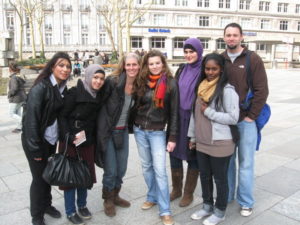 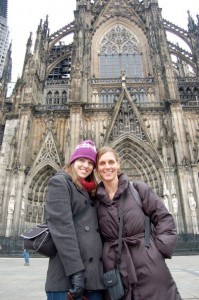 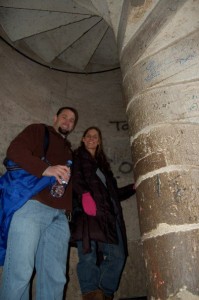 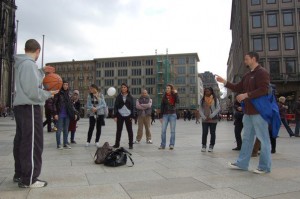 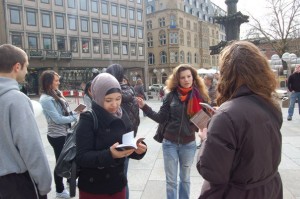 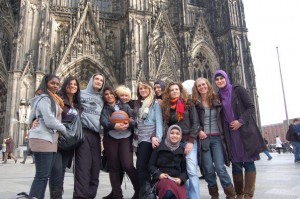 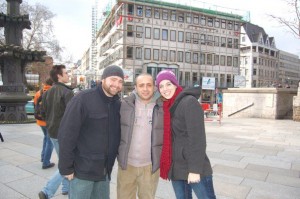 Our final night in Dorsten: 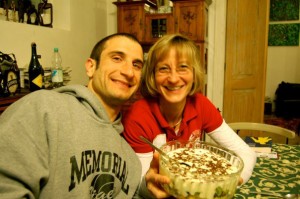 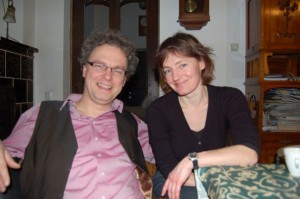 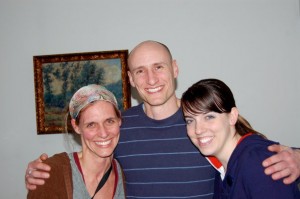