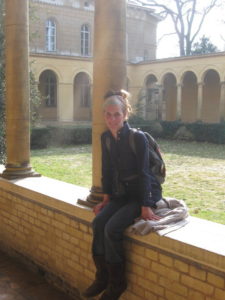 Just like my new German boot cup (it is so fun you have to drink out of it), my heart bubbles over with joy when I think about our time in Germany. It was my maiden voyage on a trip like this and I feel so blessed and humbled by the opportunity to go. Leading up to the trip I was reading the book Forgotten God by Francis Chan. In the chapter called “Supernatural Church” I came across a quote that became my heart for our time in Germany and hopefully for my life in general: “I don’t want my life to be explainable without the Holy Spirit”. From the scheduling and rescheduling of the dates of this trip to the forming of our Germany team (Jamie and me, Eric and Lisa Beavers, and Dan Occhiogrosso) the Spirit of God was at work long before this trip began and His work continued throughout our time there. He quickly knit our hearts to the precious people that we met and the beautiful country of Germany. It would be impossible to recount all that happened while we were there, but there are some moments that stand out in my mind as “Holy Spirit” moments:

After a seemingly never-ending string of delays and rebooked flights, Jamie and I finally arrived at the Dusseldorf airport to meet up with Eric, Lisa, Dan, and Rob Stearns. We were late and headed straight to Rob’s church building for a “Jesus Jam” concert. We had been up for almost 30 hours. I was tired and I am going to guess it was not one of my prettier moments. But as the youth team led us in worship my heart soared and it brought me to my feet in praise. They were not speaking my language (although they do sing a lot of worship songs in English) but together with the saints in Dorsten we worshipped in spirit and truth and it strengthened me physically and spiritually. I love that!

From Jamie’s last visit to Germany he had told me much about Cologne and wanted to be sure we went back there this time around. Cologne has a cathedral built in the 1400’s that was the only structure left standing in the town following World War II. It is breathtaking. Apart from seeing the cathedral our intention in going was to have Occhy (from Ball for Lives) dribble in the courtyard area around the cathedral and see if that sparked some conversations. Last time Jamie and Eric were in Cologne they said there were all kinds of performers and lots of people around. But this time it was a little chillier so there were only one or two acts out and about. Occhy was a little unsure since he only had one basketball (he normally uses two) and didn’t know how effective his dribbling act would be. But God took what he had to offer and multiplied it just like the loaves and fishes story in the Bible. One person dribbling a basketball multiplied into several conversations with people about Jesus and we had the opportunity to hand out several copies of Jamie’s book Fully Alive.

One of the more humbling places we visited was High Point Baptist Church in Vilseck, Germany. Duane and Daylin Beach serve there ministering to military families stationed at the nearby army base. We put on a basketball clinic Saturday evening and were in the service on Sunday morning. Upon our arrival there we learned that many of the men were returning home from training that weekend and were in the 90 day window for deployment to Afghanistan. You could sense the weight of the burden they would soon be bearing. For the Sunday school hour, Lisa invited them to join her in worship as she sang some of her original songs. I was sitting next to a woman who had a 15 or so month old son- her husband was one of those slated for deployment. As Lisa began to sing the tears began to flow from the woman’s eyes. When I had met her earlier in the day, she was frustrated and even seemed a little angry with the situation (completely understandable). But as Lisa continued to sing and play, I could see the work of the Spirit comforting and reminding this woman of truth- the truth that God knew exactly what was going on and that he cared. I know the same was true for many of the women there that day. The amazing thing is that I know Lisa did not write those songs for that particular situation. She wrote from the overflow of her own heart as God has led her this past year through some difficult times. Yet the truth of who God is and how he cares for us translates to every thing we face and God used Lisa’s gifts to comfort and bring peace to his children that morning.

And finally, for me, one of the more unexplainable things I was able to behold was the spiritual empowerment given to Jamie in the midst of an unimaginably difficult time. We departed for Germany exactly one month after Jamie’s sister Penny passed away from cancer. The reality of her being gone our minds have not come close to grasping and yet in weakness, God gives strength. As I listened to someone share their struggle with understanding where God was in the midst of cancer, my heart immediately knew our interactions in Germany were not coincidental, but orchestrated by the God of the universe. Without having all of his own questions answered, I watched Jamie, empowered by the Spirit, offer truth, hope, and peace with a sincerity of really understanding the pain this person was feeling. My husband is a strong man, but he offered those words not of his own power.

Thank you to the many of you who prayed and supported us on our trip. God heard your prayers. My mind is still debriefing all that happened, but I return home from the trip with some new faces etched in my mind and heart. Even in the few days that we have been home the Spirit of God has brought specific people to mind several times for me to pray, now with a little clearer vision for their everyday needs and concerns. I will always treasure my maiden voyage overseas- the opportunity to see the work of God in another part of his world. And it encouraged me to come home to live out my faith in my everyday calling and to hopefully bear witness to many things “unexplainable”. I hope the same for you.